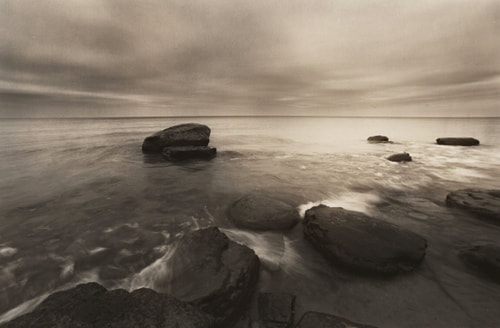 I Stand Alone Beside You - November, 2007
Bordering the eastern shores of Lake Erie State Park (Brockton, New York), this park is what I’d been searching for and finally, thanks to a friend, I found. I wanted rocks. Big rocks. And big water. The kind you see in photographs of the sea, whatever that means. At least big for our area, and within an hour’s driving distance. They’re not that big, but they’re the biggest I could find.
I remember thinking what a great day it would be for shooting. My kind of day. The sky was amazing and not a soul around. I had the whole place to myself. Most of the photographers I know would remark that it was either too cloudy or the sky was too white. But then I wasn’t looking for butterflies and rainbows either! There were ripples of clouds forming patterns in the sky. I now know these were ‘stratus undulatus’ my new word for the day! I was on an endorphin high!
I had taken my favorite film and favorite lens knowing what I wanted to capture. The film of choice was Kodak Techpan rated at EI25 and the lens, my Nikkor 14mm lens on a Nikon F100. With the 14mm I could capture the endless sky, the big water and also the rocks. I had to position my camera carefully with each leg of the tripod supported by one of the smaller rocks a few feet from shore. Using a right-angle view finder proved very helpful in composing the shot. I could keep the camera low to the ground without having to kneel down in the water.
When I saw the results I knew I wanted to tone the print. I had read Tim Rudman’s book on toning and talked to some other photographers about split-tone printing. I used Kodak Selenium at a dilution of 1:4 and Kodak Sepia bleach and toning kit. Because this was my first attempt at split-toning I had no idea what to expect other than to watch out for that smell! The results have put me on a new path for my photography. I hope in the spring to be finding more images like this one. 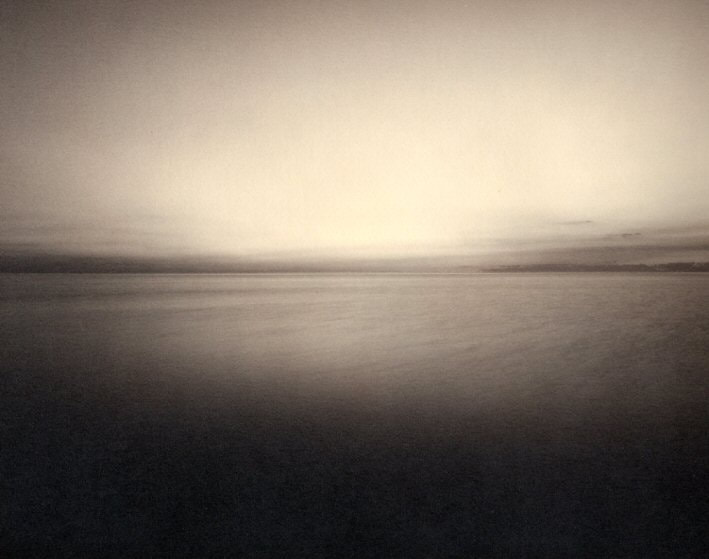 Tribal Waters - July, 2009
It was a regular day when I received a gift from a stranger. A stranger who happened to be part Cherokee. I was at the store, or rather leaving the store and in my car when a man knocked on my car window. He said he needed to give me something. At first I thought he wanted money, but I could see that wasn't the case. He went into his truck and brought over a CD which he gave me and said "I just need to give this to you... no strings attached... I can't explain..."
I was very perplexed at this and said thankyou. It was a solemn moment, rather spiritual. I never saw him again, never got his name. I drove away and put the CD in my player. It was called "Tribal Waters". As soon as I heard the chanting I began to cry. I cried hard. Something just came over me. I felt a calling to the water. So I went home & grabbed my camera and went out to Lake Erie State Park in Brocton, NY, all the while listening to this haunting music. It was a 45 minute drive so I listened to this hauntingly beautiful music the whole way. I felt like I was in a trance. It was a cold and cloudy day, too windy to photograph anything with my 4x5, but it was a perfect day anyway.
Working in a call center, I take a lot of calls from people all over the country ordering things over the phone. For the next two days most of the people who called in either lived on a street named after a Native American tribe or had some other such connection. There were people from Mojave Florida, Blackfoot ID, and one from Rattlesnake NY and more. This was the strangest thing that ever happened to me. Either their street name or their city had a Native American name and many of the people were Native American and alot from Minnesota. Then a woman who called in who also happened to be Native American, asked if I had anyone from my past that was Native American. I didn't think so, but I didn't really know because my mother was adopted. I felt like some spirit or someone was trying to contact me.

A few days before this happened, I'd been contacted by someone who, as it turns out, is the great grandaughter of my grandfather, from a previous marriage. My mother was adopted, so I never knew my real grandfather. This person also told me that the group my grandmother sang with in college, back in the 20's or 30's was named Redpath Chautauqua, another link perhaps. I don't know if there's a connection, but it certainly was a very powerful three days.
It's over now, and I still don't know why I was contacted or why this stranger gave me the CD or why all the people who called in to the call center had some connection with the Native American names. I do know that it's all good. I have an incredibly strong calling to the sea, or as it were, the lake and have always been interested in Native American music and culture. I wish I could thank the person who gave me the CD. I wish I knew why this all happened. I guess I'll never know.